Follow these steps to acquire optimal storage efficiency and performance for QuTS hero.

QuTS hero supports advanced block-based data reduction technologies (including inline data deduplication, compression, and compaction) to reduce file sizes, conserve storage capacity, and optimize performance. For example, if 20 virtual machines on a NAS are replicated using the same template, then storage space requirements for all 20 virtual machines can be reduced by up to 95%. Whether acting as primary or backup storage, the TS-h1886XU-RP R2optimizes storage utilization to provide a reliable storage cornerstone in the Big Data era. Real-time SnapSync ensures that both the primary and secondary NAS maintain identical data. When data is written to the source, it is immediately written to the destination. If the primary NAS goes offline, IT staff can simply adjust the privilege settings of the secondary NAS to ensure continuous operations. SnapSync provides the strongest support for nonstop business operations and helps users to reduce the risk of data loss. 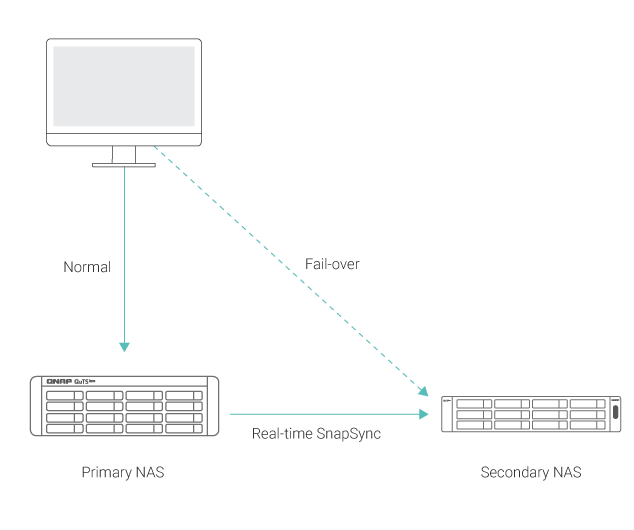 By running multiple virtual machines and containers on the TS-h1886XU-RP R2, you can deploy multi-tenant environments and applications to increase management efficiency and save hardware costs. Coupled with the Network & Virtual Switch app that boosts interoperability between virtual machines, containers, QNAP NAS, and other physical devices on the network, you can flexibly allocate physical and virtual network resources to simplify network deployment.

The TS-h1886XU-RP R2 is backed by a 3-year warranty at no extra cost. If needed, you can purchase a warranty extension that increases your coverage up to 5 years.

The TS-h1886XU-RP R2 can also switch to using QTS - QNAP's standard NAS operating system. This allows you to migrate drives from your current QTS-based NAS to the more powerful TS-h1886XU-RP R2 to upgrade your storage infrastructure.

Attention: QTS and QuTS hero use different file systems. You must remove all the drives from the TS-h1886XU-RP before switching from QuTS hero to QTS.

Note: Use only QNAP memory modules to maintain system performance and stability. For NAS devices with more than one memory slot, use QNAP modules with identical specifications. Warning: Using unsupported modules may degrade performance, cause errors, or prevent the operating system from starting.
* Sound Level Test Environment: Refer to ISO 7779; Maximum HDD loaded; Bystander Position; Average data from 1 meter in front of operating NAS.
Product images are for illustrative purposes only and may differ from the actual product. Due to differences in monitors, colors of products may also appear different to those shown on the site. Designs and specifications are subject to change without notice